Light of the Heavens 3.0 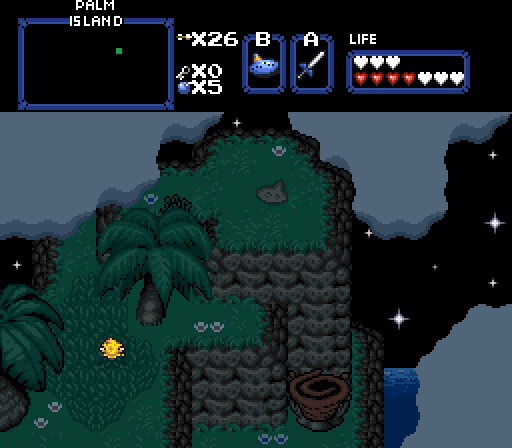 Light of the Heavens 3.0 is a complete overhaul of my first "true" quest, Light of the Heavens DX. The overworld has been revamped, dungeons have been completely redone from scratch, the story has been altered, and plenty of new items, enemies, and challenges have been added. It's essentially a completely different game now. So what can you expect from this quest?
An exciting story, told via scripted cutscenes that integrate seamlessly with the gameplay.
Three main dungeons and two optional dungeons, all of which contain scripted puzzles and gameplay mechanics.
New scripted items such as the Magnet Shot, which allow for never-before-seen puzzles and enemies.
A lovingly crafted overworld that changes as the quest progresses.
Three different endings, depending on what choices you've made and secrets you've found.
Completely scripted bosses.
And more!

After the ship he's traveling on meets an unfortunate end, Link washes ashore on the sands of Palm Island. There, he finds a horrifying sight awaiting him. A mysterious villain offers the inhabitants of the island an ultimatum: Be gone in 24 hours, or be destroyed. Determined to stop the man at any costs, Link teams up with Rose, a young woman with a troubled past, and together the two of them comb the island for anything that might help them survive. Confronted with the ruins of an ancient race, the two of them search for the answers that might save their lives. Who were the Aletians? What became of them? Who is the man threatening the island with death? How is he tied to the island? And perhaps most importantly, is there anything that can stop him? With three different endings and multiple plot twists, Light of the Heavens offers a thrilling story from start to finish.

This quest wouldn't have been possible if not for these people
SpacemanDan, for starting the two week contest years ago that led to ideas that eventually transformed into this quest.
Moosh, Evan, Aevin, and DaviAwesome, who spent hours beta testing and offering up suggestions. They also served as a source of inspiration and (in some cases) scripting advice.
Jamian, TeamUDF, and Pineconn, for additional inspiration.
Radien, for compiling the DoR tileset.
Jupiter, Mariomario, Aevin, Revfan9, and (from the Spriter's Resource) CrimsonPenguin, SmithyGCN, and Freedom Fighter, for their custom tiles and/or tile rips/edits.
VGMusic, JohnStacy, Purplemandown, Dan Furst, Espilan, and Jormungand for music.
Eppy, whose upcoming pain and suffering while streaming this quest was a constant motivator for me.
All the members of the Underneath the Armos Skype group for support and suggestions.
Too many people from the forum to name, for their support and interest in this project.
Demonlink and The Satellite, for finding bugs post-release.

Thank you, all of you! This wouldn't have been possible if not for your work!
If you deserve a spot on this list and I forgot to mention you, please contact me ASAP so I can give you the credit you deserve.

Explore! Palm Island is home to many secrets, and health and sword upgrades are available to those who seek them out.
A strong shield and potions can be purchased in Palm Village. The game was balanced around the player not having these items, but if you find parts of the game to be too challenging, they're there to make the game easier and more accessible to you.
If you want the best ending, make sure you find and befriend Rose before entering the Tidal Sanctum.
And again, explore! You won't find the best ending if you just make a beeline from dungeon to dungeon.