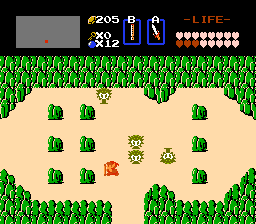 I downloaded this quest way back idk when https://www.zeldaclassic.com/resource-listing/entry/122/ called triforce of seasons. i liked it but it did not have much exploring of the overworld, so i fixed that and made it so pretty-much all of the overworld is accessible in all the seasons!

i also noticed the quest had 3 stars, which looked like if it had more done into it would be 4 or 5 stars back then, so i fixed that changing dungeon locations and added in the items the original author did not include in the game, added more secrets that i don't even remember.

the remix is near complete like say it's 0.95 beta, i may add more overworld and all the new buildings i add are blanks and currently serve no extra purpose. meaning it is complete and able to be finished just don't expect much interior exploration.

the dungeon interiors have been kept the same and i believe the order of items is the same although i may have changed that, i also in the nature of this remix fixed a bug where could glitch off the map, but added a few new bugs but none that are game-breaking.

i have not been able to contact mr.z to see if he want's this remix to come out, but seeing the age and the fact he left the quest unlocked for ages, from then to now he probably intended it to be modded by others, I also left it unlocked.

some evil is at it again, and this time they found portals to 4 alternate dimensions having there time set at different seasons, where the weather is lively but rarely changing, now that all changes with that evil trys to obtain the triforce once again in attempt to destroy God,s kingdom, you the here must protect the kingdom of God and save the day, untill that evil comes right back again!

i have already given you the root password, however it's going to kill you to know what the lower 3 are^^