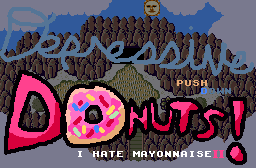 This is a goofy quest I worked on periodically from 2009-2011. It's a spiritual sequel to I Hate Mayonnaise, although unlike the first one, it didn't spawn from a quest contest. It's also a fair bit longer -- there are 5 dungeons and many more minidungeons -- but it still probably won't take you too long to beat. I'd estimate roughly 6-7 hours on the first playthrough, and that's if you bother to retrieve everything. It tries pretty hard to be funny and quirky; sometimes successfully, mostly not really. A lot of the strings spawned from in-jokes on a forum I was on during the development period. It was previously unavailable on ZC.com; I decided to go ahead and submit it.

This was originally intended to be a sister quest to Exate's Pessimistic Pizza, hence the title, and they were meant to come out around the same time. However, due to delays in both quests' development, that plan didn't work out.

I'd say it's fairly easy, especially in terms of combat; any difficulty is much more likely to come from the puzzles.

This quest was mostly designed in 2.10, so it mostly sticks to that version's features. There's not much in terms of scripts or newer mechanics in this quest.

Hope you enjoy it!

See ihatemayo2_notes.html for the full credits, including music credits!