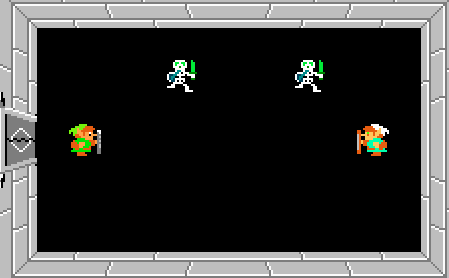 Welcome to Small World. The sequel of my old buggy quest known as Roebloz's World Adventure. This time it has been playtested don't you worry. The quest features a small world with only 6 dungeons (4 with triforce pieces, 1 leading to the penultimate level, and the final level). The concept of this quest is that the world is smaller than your usual Zelda Classic quest. It features two new custom mini-boss, revised palettes, and two new original bosses.

After defeating Knil and Ganon last time, the timeline collapses on itself and creates a new world called...Small World. You relax as there is no threat right now. However, one of Ganon's monsters survived. With his magic powers he revives Ganon and the now-revived Dark Prince steals four parts of the Triforce of Courage, and unleashes his army to try and find the four remaining pieces. Little did he know, you have the four pieces. You grab your shield, and you get ready to recollect the stolen Triforce pieces, defeat Ganon, and save the world once and for all!

There are two Heart Containers and One item in most dungeons (apart from the two last ones).
Level-3 can be opened when you defeat the Patra in the overworld, and Level-4 by killing the Gohma in front of the brick wall.

No entries match your request.