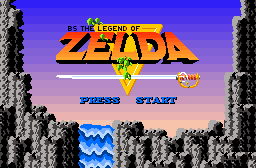 This introduction is for those of you who don\'t know about BS Zelda, and/or those who enjoy reading a bit of video game history every now and then. If you are not one of these people, feel free to skip down to the TL;DR at the bottom!

In 1995, Nintendo released the Satellaview, a peripheral for use on the Super Famicom. As its name implies, it was used to connect the console to broadcast satellites in order to download special broadcast games and applications, similarly to the Sega Genesis\'s Sega Channel, or the Intellivision\'s PlayCable.

Over the course of the Satellaview\'s lifespan, there were a number of games developed specifically for it, includion two Zelda games. One of these was aptly titled \"BS The Legend of Zelda,\" BS standing for \"broadcast satellite.\" The game was, for all intents and purposes, a remake of the first Zelda game, albeit with a number of differences. First off, the graphics and sound effects received a very welcome SNES makeover. More importantly, however, the game was broadcast over the course of a month, being split into four \"weeks,\" each week having a different set of objectives for the player to complete in a fifty-minute time span. In order to compliment this new fast-paced gameplay, the Overworld was halved in size, and with four distinct sections for the player to get to every week. The dungeons were also completely redesigned, with no ninth dungeon - although Level 7 inherited a shrunk-down version of level 9\'s skull shape. Another addition to compliment the new gameplay was fully voice-acted narration to push the player along in the right direction. Link was also replace with the mascots of \"BS-X: The Story of the Town Whose Name Was Stolen,\" (great name, guys) the game cartridge which was used with the Satellaview to load broadcast software into the Super Famicom\'s memory.

After service for the Satellaview, BS Zelda would never again be graced with an official release. The game would suffer an unfortunate fate of being locked away deep in Nintendo\'s archives never to see the light of day again, eventually succumbing to bit-rot, before crumbling into dust in the far-flung future. ... Except, of course, that didn\'t really happen. While it was never re-released officially, a ROM of the game was leaked onto the internet, albeit with some problems. Emulation issues, loss of broadcast audio, loss of BS-X functionality, and so on rendered the game practically unplayable.

Before long, a small but enthusiastic community sprung up consisting of ROM hackers and Zelda fans, who to this day work tirelessly to restore the game to its original intended state. Armageddon Games has even played a small role in this: The Romview utility that is bundled with the newest versions of Zelda Classic was originally written by Phantom Menace, the creator of Zelda Classic, specifically for use with BS Zelda, over fifteen years ago. An old version of the program can even still be downloaded at the BS Zelda Homepage, the core of the BS Zelda community.

Similarly, the BS Zelda Homepage includes a small section specifically for BS-Zelda-related content made in Zelda Classic. One quest featured on that page - and in this very quest database - is a remake of BS Zelda in Zelda Classic versions 1.90 and 1.92, made by Vel, a member of the ZC Community, back in 2004. This is what provided the inspiration for this little project.

Today, the impact of BS Zelda on the Zelda Classic community is not only undeniable, but inescapable. Some of the most-used tilesets in use over the past decade or so - such as Pure and Dance of Remembrance - contain a large amount of graphics from BS Zelda. Even in ZQuest itself, there are innumerable enemies, combo types, quest rules, and so on, which refer to BS Zelda in some ways.

This brings me to the reason this quest was made in the first place. BS Zelda is incredible important to Zelda Classic; its influence is everywhere. Vel\'s BS Zelda remake from 2004 is a testament to the constant crossover of BS Zelda into ZC, but Zelda Classic has grown and evolved considerably since then. I only find it fitting, therefore, that BS Zelda be given the ZC remake treatment once more in honor of the impact it has made.

TL;DR - BS Zelda is a remake of Zelda 1, but with some twists, including a smaller overworld and a timer. It has also had a huge impact on Zelda Classic and its creative community. Vel remade the game really well in ZC 1.90 and 1.92 back in 2004, but I feel that it deserves another remake in ZC due to how far it has come as a game engine.

Ever played the Legend of Zelda? Yes. You have. I\'m fairly certain of it. This is pretty much that. Except like you play as the BS-X mascots and not Link, but I put an option to play as Link in here, so don\'t you worry your poor little heart.

DXTaco – Provider of my cartridge copy of the MottZilla Project which has been invaluable to me in this quest\'s creation.

The BS Zelda Homepage – http://bszelda.zeldalegends.net – Without this site, there would be no BS Zelda community to speak of, and precious little information on the games beyond just numbers and figures, and maybe a few screenshots here and there. It has been an absolutely crucial resource to me for this.

The game is broken up into four “weeks.” Each of these is fifty minutes long, starting at 0X:07, and ending at 0X:57 – This is how the game was broadcast.

Over the course of the game, gameplay will occasionally halt at certain specific points and something will happen. Sometimes an item will be powered up in some way. Sometimes a fairy will appear. Sometimes all enemies on screen will be killed.

The only times that the game will save is at the end of each week. Just as you couldn\'t stop a TV broadcast in the summer of 1995 and come back to it a few days later right where you left off, you can\'t just save the game in the middle of the thing here!

You can, however, press the “Ex1” key to skip straight to the end of the week.

The Map key, usually bound to the space bar, is used here for opening and closing your Objective Screen! This tells you what you should find by the end of the week. This is also the only way of pausing the clock, aside from pausing Zelda Classic as a whole.

Bringing up the normal subscreen will not stop time!

Wait, I need an actual hint and/or cheat and/or spoiler listed here? Okay, here\'s one. At some point during the first week, a Heart Container will appear at the beach. You will only have about ten minutes to get it before it disappears.