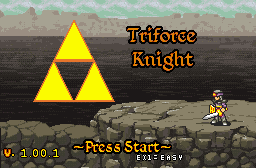 This quest is not my own. Many people from many walks of life contributed to its development. From my cousin, who originally decided that there should be a knight like character in place of Link, to Joki who planned a great portion of the dungeons. Contributions poured in from many people as I was working on it. People held on to the original file as I carelessly switched computers. Some were even so kind as to stream the quest during expos and offer much needed feedback. I can take credit only for being the primary constructor of the quest.

There are 10 Dungeons and 4 Bonus Dungeons.

To play with enhanced music, grab the music from the following link:
https://drive.google.com/open?id=1A9MJz5Xyd8hgqGTaIPbl248EJo41S0yC

1.Cleaned up some flaws and errors in the final dungeon.
2.Fixed the bug where you couldn't get the ruby.
3.Added pickup strings to items that didn't have them.

At the outset of Hyrule, there were three Goddesses. Din, Farore, and Nayru. The Triforce was the culmination of their essences.The Triforce itself was alive, and could see its very grim future. In order to preserve itself, it created an avatar, a Knight of incredible power. The Triforce Knight was given Free Will, but a strong sense of responsibility. Link has journeyed far away, Zelda is sealed, and Ganon runs amok. Hyrule hangs in the balance for his quest to restore the Triforce to unity.

Pressing EX1 at the title screen will start you with more health and the training tunic. Additionally, all shops will be half off.