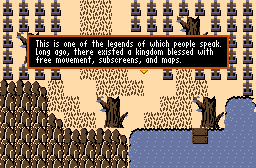 "Tabula rasa is a Latin phrase often translated as "blank slate" in English and originates from the Roman tabula used for notes, which was blanked by heating the wax and then smoothing it. This roughly equates to the English term "blank slate" (or, more literally, "erased slate") which refers to the emptiness of a slate sheet previous to it being written on with chalk."
(Wikipedia)

In this miniquest, you start with nothing. Literally nothing. You have to relearn basic features such as moving around, having a subscreen, being able to use your buttons, etc. Even the title screen and the cutscene explaining the storyline have to be found within the game.

You can expect meta jokes, fake glitches, and about one hour of gameplay for a first time player.

NB:
- The quest expects you to be familiar with Zelda 1 and ZeldaClassic.
- If you find a glitch, it probably isn't a real one.

Find the storyline within the game.

If you want to see your item completion %, you have to find the active subscreen.